Mortality is the number of deaths occurring in a specified population in a given time period. It can be expressed as an absolute number of deaths per years or as a rate per 100,000 persons per year. The mortality rate is a measure of the risk of dying due to cancer.

The mortality statistic is based on data from civil registries and death certificates issued by doctors. The coding of death and the selection of the underlying cause of death is carried out by the Swiss Federal Statistical Office (FSO).

This report presents the incidence figures for 35 types of cancer in the last 25 years for all of Switzerland, for the German-speaking part of Switzerland (including Rhaeto-Romanic-speaking cantons) and for the French- and Italian-speaking parts of Switzerland. The 1976 European standard was used for the standardisation of rates. The most recent data are from 2016.

On 1st of January 2020, the Cancer Registration Act (CRA) came into force, which also regulates extensive measures for data protection. According to Art. 30, Para. 3 and 4 of the Cancer Registration Ordinance (CRO), data must be aggregated before publication. The minimum number of cases for any publication of results is 20 cases. Since at the cantonal level (and to some extent also at the level of the language regions), the minimum case number of 20 is often not reached even after cumulation over 5-year periods, the interactive cancer atlas has not updated in 2020. However, the cancer atlas published on 27.11.2018 can still be accessed (last mortality year: 2015). 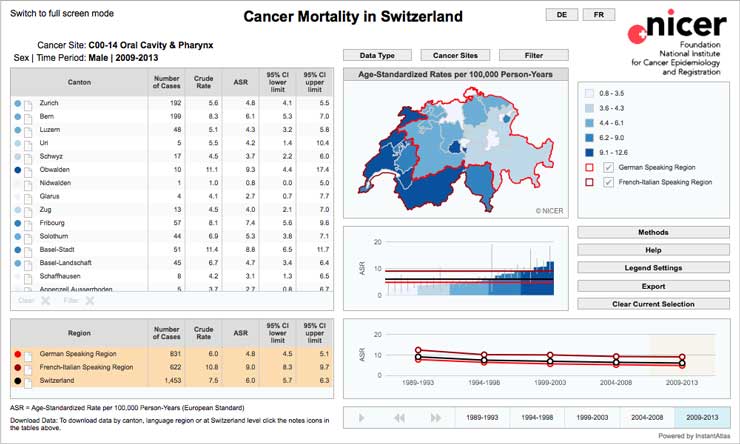